Founded in 1727 by the great warrior and astronomer Maharaja Jai Singh II, Jaipur—the first planned city of India, named after its founder, forms a part of the West Golden Triangle Tourist Circuit along with Delhi and Agra. Moreover, neighbouring Jodhpur, Jaisalmer, Udaipur, Kota and Mount Abu, Jaipur has forever been Rajasthan’s quintessential showcase, which has itself been time’s favourite canvas—painted, worked-on and influenced by myriad events and history’s hotshots. Leading to Jaipur being the abode of numerous famous monuments and edifices, kitchen to multifarious gastronomic ingenuities and home to world-renowned luminaries who have been leaving their distinctive mark on the world.

Come for APICON 2022, come for a festive journey, an ode-yssey, which celebrates Jaipur—a World Heritage Site.

Places to visit in Jaipur 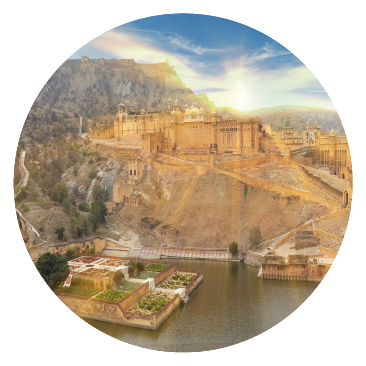 Located in Amer—a town 11 Kms. from Jaipur, the Amer Fort is strategically positioned high on a hill. The principal tourist attraction in Jaipur, the fort is known for its artistic style elements.

With large ramparts and series of gates and cobbled paths, the fort overlooks the Maota Lake and was greatly influenced by Mughal architecture. Constructed of red sandstone and marble, the attractive, opulent palace is laid out on four levels, each with a courtyard. 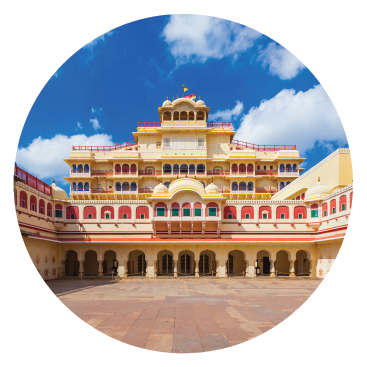 Maharaja Sawai Jai Singh II established the City Palace in 1727 along with the city of Jaipur, when he moved his court to Jaipur from Amber. This was necessitated by an increase in population and water shortage and until 1949 the City Palace was the ceremonial and administrative seat of the Maharaja of Jaipur.

The palace complex, which lies in the heart of the city, is a unique and arresting complex of several courtyards, buildings, pavilions, gardens, and temples and now houses the Maharaja Sawai Man Singh II Museum, continuing to be the home of the Jaipur royal family. 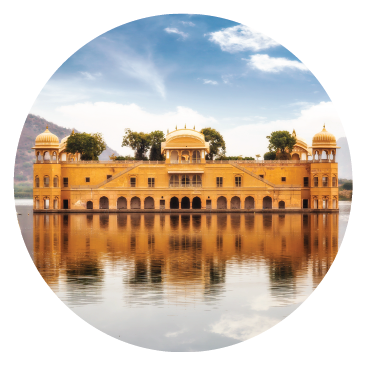 Jal Mahal is a palace in the middle of the man-made Man Sagar Lake in Jaipur. Raja Man Singh constructed both the palace and the lake in 1610 damming River Dravyavati, which were later enlarged in the 18th century by Maharaja Jai Singh II of Amber.

Jal Mahal palace is an architectural showcase of the Rajput style of architecture with a picturesque view of the lake. Built in red sandstone, it is a five-storied building, of which four floors remain underwater when the lake is full with the top floor exposed. 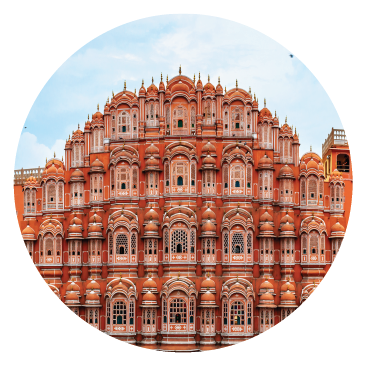 Built with the red and pink sandstone by Maharaja Sawai Pratap Singh in 1799, the Hawa Mahal is a palace in Jaipur, which sits on the edge of the City Palace and extends to the ‘Zenana’ or women's chambers. It is a 50 feet high, five-storey, pyramidal monument built akin to a honeycomb with its 953 small windows called Jharokhas decorated with intricate latticework.

The original intent of the lattice design was to allow royal ladies to observe everyday life and festivals celebrated in the street below without being seen, since they had to obey the strict rules of "purdah", which forbade them from appearing in public without face coverings. This architectural feature also allowed cool air from the Venturi effect to pass through, thus making the whole area more pleasant during the high temperatures in summer.

The palace is an extended part of a huge complex. The stone-carved screens, small casements, and arched roofs are some of the features of this popular tourist spot. The monument also has delicately modelled hanging cornices. 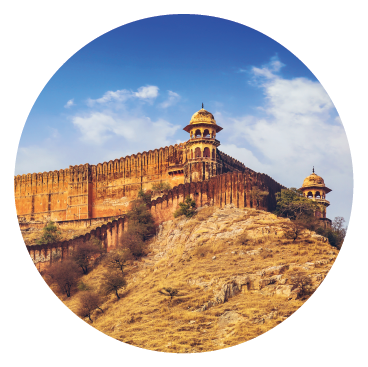 Jaigarh Fort is situated on the promontory called the Cheel ka Teela (Hill of Eagles) of the Aravalli range; it overlooks the Amer Fort and the Maota Lake, near Amer in Jaipur.

The fort was built by Jai Singh II in 1726 to protect the Amer Fort and its palace complex and was named after him. The fort features a cannon named "Jaivana”, which was manufactured in the fort precincts and was then the world's largest cannon on wheels. 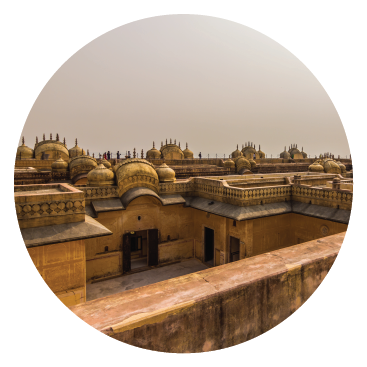 Nahargarh Fort built mainly in 1734 by Maharaja Sawai Jai Singh, stands on the edge of the Aravalli Hills, overlooking the city of Jaipur. Along with Amer Fort and Jaigarh Fort, it once formed a strong defense ring for the city.

The fort originally named Sudarshangarh became known as Nahargarh, which means 'abode of tigers' and was constructed as a place of retreat on the summit of the ridge above the city.

Walls extended over the surrounding hills, forming fortifications that connected this fort to Jaigarh. 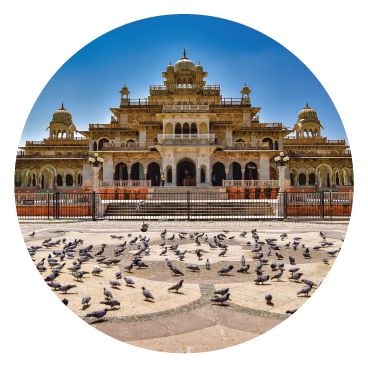 The Albert Hall Museum in Jaipur is the oldest museum of the state and functions as the state museum of Rajasthan. The building, a  fine example of Indo-Saracenic architecture got its name from the Victoria and Albert Museum of London, because of the similarity of architecture. Opened as a public museum in 1887, it was initially planned as a town hall, but later Madho Singh II decided it should be a museum for the art of Jaipur and included as part of the new Ram Nivas Garden.

The museum has a rich collection of artifacts including paintings, jewelry, carpets, ivory, stone, metal sculptures, and works in crystal. The collection includes coins from the Gupta, Kushan, Delhi Sultanate, Mughal and British periods. An Egyptian mummy is the main attraction of this museum. 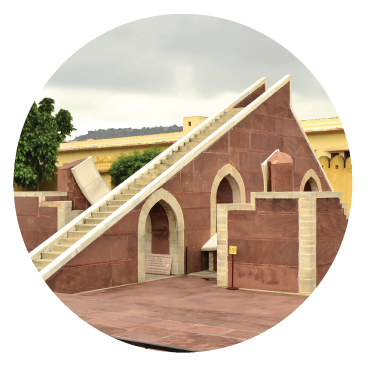 The monument, built from local stone and marble, bronze tablets, bricks and mortar was completed in 1734 and features the world's largest stone sundial.