Rajasthan, literally means "Land of Kings" or "King's Abode". A name, which couldn’t have been more apt given the fact that everything about it is huge, reflecting its magnificence.

The largest state in India—covering an area of 342,239 SqKms., Rajasthan shares its borders with the Pakistani provinces of Punjab and Sindh and with five Indian states: Punjab, Haryana, Uttar Pradesh, Madhya Pradesh and Gujarat.

A visitor to Rajasthan is simply overwhelmed by the sheer magnitude of places to visit and experience.

To begin with as a state renowned for its forts, Rajasthan lists Hill Forts, which are in the World Heritage List such as the Chittor Fort, Ranthambore Fort, Gagron Fort, Amber Fort, Jaisalmer Fort, Kumbhalgarh Fort and the Mehrangarh Fort. Rajasthan also list other famous forts such as the Nahargarh Fort, Bhatner Fort, Junagarh Fort, Lohagarh Fort, Taragarh Fort, Jalore Fort, Nagaur Fort and the Shergrah Fort.

Other major features include the Dilwara Temples, a Jain pilgrimage site at Rajasthan's only hill station, Mount Abu, in the ancient Aravalli mountain range and in eastern Rajasthan, the Keoladeo National Park near Bharatpur, a World Heritage Site known for its bird life. Rajasthan is also home to three national tiger reserves, the Ranthambore National Park in Sawai Madhopur, Sariska Tiger Reserve in Alwar and Mukundra Hill Tiger Reserve in Kota.

As for the heart, Rajasthan is renowned the world over for its unmatched hospitality, reminiscent of the facets of the Rajputana Culture. 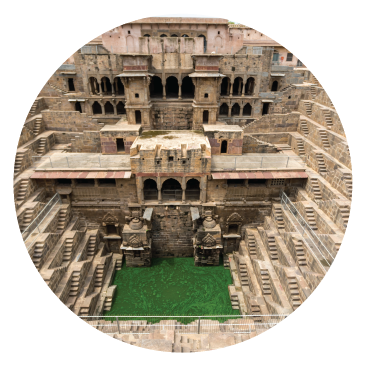 Abhaneri, a village 95 kms. from Jaipur, is famous for Chand Baori, one of the oldest, deepest and largest baoris (stepwells) in Rajasthan. Consisting of 3,500 narrow steps over 13 stories, it extends approximately 100 ft into the ground.

Dating back to the 8th century, the stepwell consists of three flight of stairs descending into the earth. The flight of stairs and the palace are arranged in a square pattern with the well lying at the bottom.

As the air at the bottom of the well remains 5-6 degrees cooler than at the surface, Chand Baori was used as a community gathering place during periods of intense heat with one side of the well having a haveli pavilion and resting room for the royals. 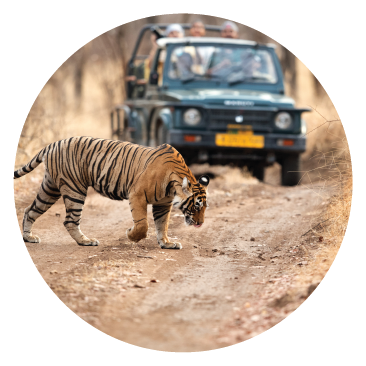 Covering 282 Kms., Ranthambore National Park was established in 1955. A wildlife sanctuary known for Bengal tigers, it is situated in the Sawai Madhopur district, about 140 km southeast of Jaipur.

Named after the historic Ranthambore fortress, which lies within the park, it is home to the Indian leopard, striped hyena, mugger crocodile, chital and many more species.

The sanctuary is also home to a wide variety of trees, plants, birds and reptiles, as well as one of the largest banyan trees in India. 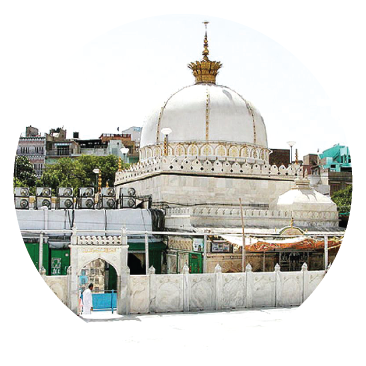 A shrine of the Revered Sufi Saint, Moinuddin Chishti built around his maqbara, the Ajmer Sharif Dargah is located at Ajmer, some 130 Kms from Jaipur.

Moinuddin Chishti was a 13th Century Sufi mystic saint and philosopher who travelled across South Asia, eventually settling in Ajmer where he died in 1236.

In 1332, the Sultan of Delhi, Mohammad Bin Tughluq constructed a dargah, where people from all religions come to pray and it grew in popularity and size over the years. It has been estimated that around 150,000 pilgrims visit the site every day. 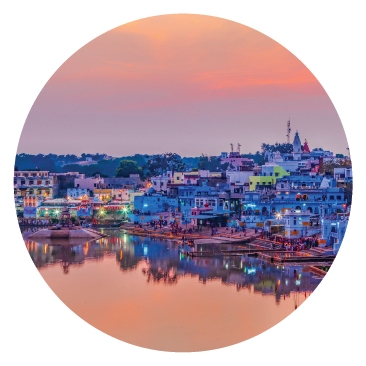 The Hindu scriptures describe it as "Tirtha-Guru" – the preceptor of pilgrimage sites related to a water-body and relate it to the mythology of the creator-god Brahma, whose most prominent temple stands in Pushkar. The Pushkar Lake finds mention on coins as early as the 4th century BC.

With over 500 Hindu temples situated around the lake, Pushkar Sarovar has 52 bathing ghats where pilgrims throng in large numbers especially around Kartik Poornima (October–November) when the Pushkar Fair is held. 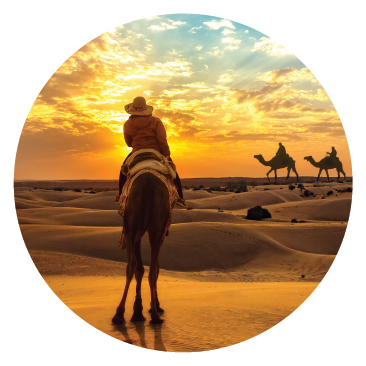 Located 575 Kms. west of Jaipur, in the heart of the Thar Desert, lies the city of Jaisalmer. Named after RawalJaisal who founded the city in 1156 AD, Jaisalmer means the Hill Fort of Jaisal because of a fort, which crowns the city.

Also, nicknamed "The Golden City" because of the yellow sandstone used to build the town and fort, which contains a royal palace and several ornate Jain temples, built of finely sculptured sandstone. 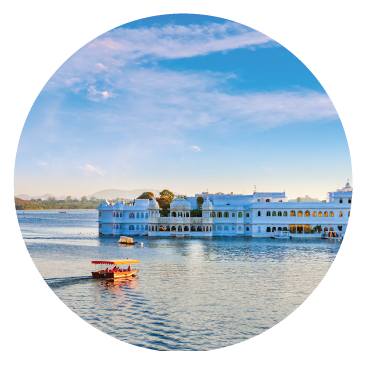 Udaipur was founded in 1558 by MaharanaUdai Singh II of the Sisodias Clan. Surrounded by the Aravali Range, it is around 393 Kms. from Jaipur.

Dubbed "the most romantic spot on the continent of India" by British administrator James Tod, Udaipur is also popularly known as the "City of Lakes" because of the seven lakes surrounding the city.

Besides lakes, Udaipur is famous for its forts, palaces, museums, galleries, gardens and temples, as well as traditional fairs and festivals.